This Tree Bleeds When You Cut Into It 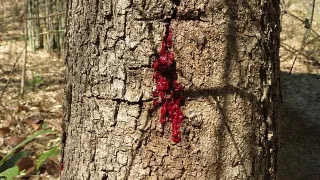 Tannins are the chemicals that make your
mouth feel a little like it was washed with
cleanser after you eat grapes or drink wine.
They are polyphenols, which means they are
made up of many phenols.

terocarpus angolensis , or wild teak, looks like a
perfectly normal tree until it's wounded.
When you cut into it, it dribbles long trails of
dark-red liquid down its trunk. Wild teak has
come to be known as Bloodwood, for obvious
reasons.

Tannin bind with or precipitate proteins, and
scientists think that they form part of the
plant's defense mechanism. When an animal
bites into the plant, the tannins, which are
usually stored in only certain parts of the
plant, are let loose.

Does the bloodwood's copious amount of
tannins reduce its consumption? Perhaps by
animals, but not by humans. The timber is
sought after in its native Africa, and around
the world. Because of the sap's resemblance to
blood, it's even become a folk-remedy for
diseases of the blood.


Tannins cause the dark red color of the sap.
Regular plants have parts – leaves, skins, sap –
that are about 12-20% tannins. Bloodwood has
sap that is 77% tannins.

Not only are they supposed
to taste bad to animals, their ability to bind to
nutrients like proteins (and sometimes
carbohydrates and starches) reduces the
animal's ability to digest its food. Tannins can
make food not worth eating.

Which isn't to say that we don't eat them
anyway. Tannins leach into wine from the oak
barrels it's stored in, and humans have
developed a taste for them. Sometimes wine-
makers add powdered tannins to wine to
simulate the flavor.